How does the NHL Entry Draft work?

You know how they say, “anticipation is the greatest joy of all”? Do they say that in English? I don’t know. Anyways, the NHL Entry Draft goes down tonight (23rd of June 2017) in Chicago. All eyes are two kids, one from Winnipeg, Manitoba and one from Naters, Valais. In order for you to enjoy this potentially historic moment in Swiss hockey history, let me quickly explain the NHL Draft to you.

The NHL Draft is where NHL teams pick the best young hockey players between the ages of 17 and 20 from all over the world to play for their team. If a player gets picked in the draft, he has no choice but to play for the NHL team that has picked him for a long time (fun!). Ignoring the numerous loopholes and exceptions, “a long time” usually means until the age of 26 or 27. That is the reason, why we say that an NHL team “holds a players’ rights”, even if he has not yet been signed to a NHL contract.

The NHL’s first Draft was held in 1963 and was called “NHL Amateur Draft”. At the time, the other four teams in the league felt that Toronto and Montreal had an advantage in the system due to their ability to throw copious amounts of money at any young player they wanted on their team. As a consequence, and after many boardroom battles, a draft was put in place. This gave the worst team in the regular season the chance to snatch up the best young player of that year.

The league has dramatically changed since then, but the idea behind the draft remains the same. There was a change in 1994, however, as the Draft Lottery was introduced. It gives every team that missed the playoffs a chance to win the 1st overall pick as it determines the draft order in the first round. Today there are seven rounds, meaning that in theory, every team gets to select seven players.

Speaking of that, let’s look at how the draft actually works. As mentioned, there are seven rounds. In every round, every team gets to select one player (every team has a pick per round). Last year, the Toronto Maple Leafs won the Draft Lottery and therefore they held the first overall pick. As they chose to select ZSC-Legend Auston Matthews with that pick, the Winnipeg Jets, who held the second overall pick, could then choose any draft eligible player except Matthews. After the first 30 (31 this year with the addition of the Vegas Golden Knights) picks, the draft moves into the 2nd round. From here on out, the draft order goes according to the standings. Because Toronto was also the worst team in the league in 2016, they also held the first pick in the 2nd round, the 31st overall pick. Because Winnipeg got lucky in the Draft Lottery, they moved up in the draft order in the first round, but now in the second round, the second worst team (Edmonton, of course) held the second pick in the 2nd round, the 32nd pick overall. Simple, no? Also not very interesting, so let’s move on.

Who are the players that the teams are selecting? Generally, it’s any player between the age of 18 and 20, the cut-off date for 18-year olds being September 15 of the same year. This means 17-year-olds can get drafted if they turn 18 before September 15. Most players come from the Canadian major junior leagues (OHL, WHL, QMJHL) but American “junior leagues” (NCAA, USHL, USNDP) as well as the Swedish and Finnish top leagues are represented frequently.
If a player doesn’t get selected in his first year of draft eligibility, he can re-enter the draft next year and hope a team will pick him up this time around. If he has still not been picked in his last year of eligibility (age 20) he becomes an NHL Free Agent and should probably give up perusing an NHL career and become a car mechanic or something.

One thing that I should address is the trading of draft picks. As you now know how the draft works, this should be obvious. Or maybe I explained it terribly… who knows. As mentioned above, every team in theory holds one selection per round. However, they can trade any of their 7 picks. This means they trade the right to select a player with that pick to another team. The position of the pick is bound to its original team, meaning if say, Anaheim acquires Tampa’s pick, Anaheim gets to draft at the position where Tampa would have picked.

There is clearly a theme with draft pick trading: 2nd Round picks get traded a lot and for varying returns. The reason for that is that there is a good chance you’ll get a decent player in the 2nd round (PK Subban, Chris Chelios), but you might just as well end up with a total bust. My personal favourite in this category: Tim Ramholt (2nd Round, 2003), whose NHL career lasted 45 seconds. Patrice Bergeron went 6 picks later that year, by the way. draft-enthusiasts like my fellow writer on this site will tell you that this, the 2nd round, is where the draft really starts getting interesting. Personally, I would disagree, mainly because I’ve usually never heard a single name that gets called once we’re out of the first round.

A bit of math at the end: Here is a chart I stole from TSN.ca that shows the chances of getting a proper NHL’er by round. This should help you somewhat understand the value of a draft pick in trade talks. 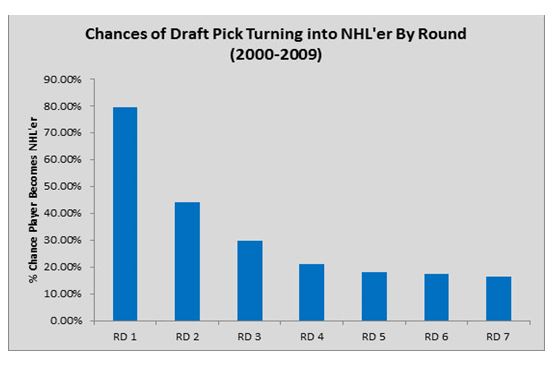 There you have it. Pretty much all you need to know about the NHL Draft. If I left any of your questions unanswered, or you have a suggestion as to what I should explain next, tweet me @EuroCaps on Twitter or send me an electronic letter at nhlepxlained@swisshockeynews.ch.

The NHL can be very complicated and scary. But fear not because someone is here to explain it! Ever wondered how the NHL Draft or Salary Cap works? You'll find answers here.